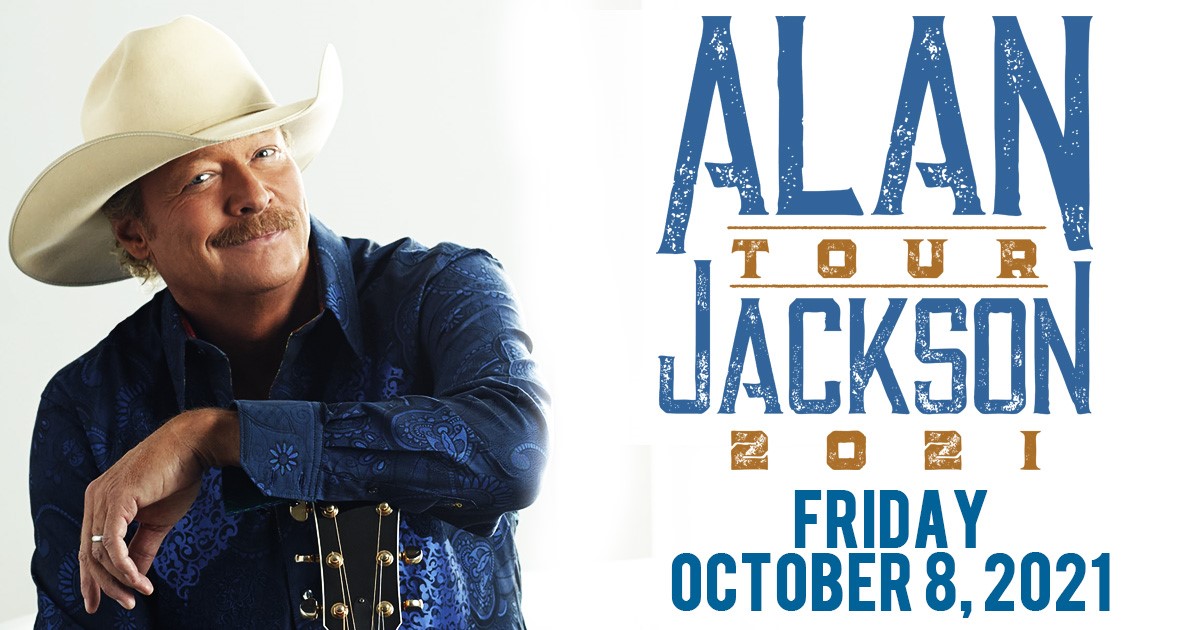 Country Music Hall of Famer Alan Jackson will bring decades of hits to the stage when he performs in concert at Bridgestone Arena in Nashville, TN on October 8, 2021!

Tickets and information are available at Ticketmaster.com, by phone at 1-800-745-3000 or by visiting alanjackson.com/tour, where you can find information about Alan, his tour schedule, music and more. Jackson is again teaming up with CID Entertainment to offer VIP Experiences at many of his 2019 shows; fans can choose from four experiences with a variety of perks including a backstage tour, the opportunity to watch the show from a barstool by the soundboard, access to a pre-show party featuring live music, a signed item, and more!

Jackson’s Bridgestone Arena show will be the country icon’s first Nashville concert in three years! His last full-scale show in Music City was held on Broadway to celebrate the kickoff of the Nashville Predators’ 2017 home stand in the Stanley Cup Finals.

Alan Jackson’s concerts find the country icon performing hits that have gained him legions of longtime fans, songs that continue to draw new crowds as new generations discover his music. Jackson’s repertoire stands the test of time; it has impacted all sorts of artists who cite Jackson as an influence. It’s these same songs – many written by Alan – that have earned him his place alongside country music’s greatest names and cemented his place in its history with membership in the Country Music Hall of Fame and the Songwriters Hall of Fame. Fans will hear the songs they love from the man who wrote them and made them famous – enduring hits such as his debut single “Here in The Real World”…signature songs “Chattahoochee,” “Drive” and “Gone Country”…party anthems “It’s Five O’Clock Somewhere” and “Good Time”…and many, many more.

In addition to a special guest (to be announced), Alan’s Nashville tour stop will showcase one of Jackson’s favorite rising stars who play at AJ’s Good Time Bar, his self-owned honky-tonk just a few steps away on downtown Nashville’s famed “Lower Broadway.”

Alan Jackson’s songs have gained him worldwide acclaim, from critics and fans alike. In 2021, he’ll continue his tradition of “keepin’ it country” as he brings 30 years of hits to Bridgestone Arena next summer!