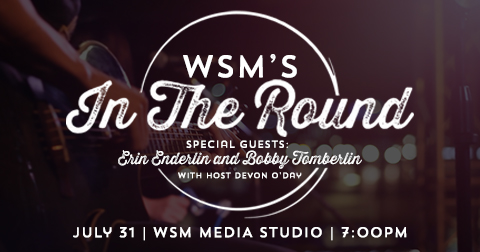 Join hit songwriter and WSM Radio personality, Devon O’Day, as she hosts the inaugural WSM’s In the Round Songwriters Night in the new WSM Media Studio presented by Springer Mountain Farms near the Opryland Hotel on Wednesday, July 31 at 7 pm. The two special guests are Erin Enderlin, who has written songs like “Last Call” for Lee Ann Womack, “Monday Morning Church” for Alan Jackson and “You Don’t Know Jack” for Luke Bryan and Bobby Tomberlin, who co-wrote the number one single “One More Day” for Diamond Rio and co-wrote a “Good Day to Run” with Darryl Worley that hit the Top 10 with Darryl. Up-and-coming singer/songwriter Chancie Neal will open our event with a pre-show performance as attendees arrive.

The VIP ticket includes a special gift from the featured songwriters and VIP seating, as well as beer and snacks compliments of the Bavarian Bierhaus.