Ralph Stanley: Voice From On High 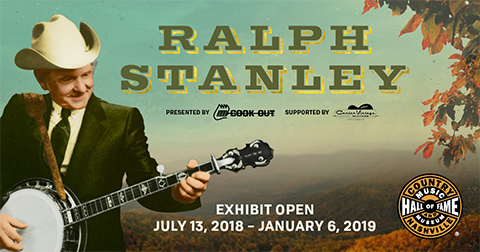 The Country Music Hall of Fame® and Museum tells the story of legendary mountain musician Ralph Stanley in its exhibition Ralph Stanley: Voice from on High. The exhibit opened July 13, 2018, and will run through Jan. 6, 2019.

“Stanley’s unique style and distinctive tenor broke new ground in bluegrass, and he became a standard-bearer for country music’s Appalachian folk roots,” said Kyle Young, CEO of the Country Music Hall of Fame and Museum. “He has influenced iconic musicians including Country Music Hall of Fame member Emmylou Harris and Class of 2018 member-elect Ricky Skaggs. His powerful music remains a touchstone for musicians and fans worldwide, and we are honored to examine the indelible impact he had on American music.”

This exhibition is made possible, in part, by presenting sponsor Cook Out and supporting sponsor Carter Vintage Guitars.

Visit countrymusichalloffame.org for more information about the new exhibit.

650 AM WSM
Country Music Hall of Fame and Museum