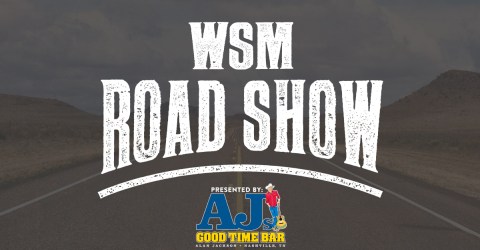 NASHVILLE, TN — 650 AM WSM, the radio home of the Grand Ole Opry, is pleased to announce the launch of the 2018 WSM Road Show, a live performance talent competition highlighting up and coming country music singer/songwriters. Presented by AJ’s Good Time Bar, which is owned by Grand Ole Opry member Alan Jackson in Nashville, Tennessee, the talent competition will award one grand-prize winner the opportunity to play the Grand Ole Opry in 2018 on the same evening Jackson makes an Opry appearance.

A two-hour matinee competition, the WSM Road Show will broadcast live on 650 AM WSM and wsmradio.com from 1-3 p.m. CT, from the stages of these historic Tennessee theaters:

The final round of the competition will take place on Saturday, March 24 from 1-3 p.m. CT at AJ’s Good Time Bar in Nashville, Tennessee.

“The WSM Road Show takes us back to a day when radio stations would visit outer lying areas and seek up and coming talent,” said Chris Kulick, WSM General Manager. “I am thrilled to give new country artists the opportunity to further their careers, and to be awarded the chance to play the Grand Ole Opry along with a legend like Alan Jackson is career-changing!”

Recently inducted to the Country Music Hall of Fame, Alan Jackson’s membership among country music’s all-time greats is the latest in a long line of career-defining accolades that include three CMA Entertainer of the Year honors, more than 25 years of membership in the Grand Ole Opry, a 2016 Billboard ranking as one of the Top 10 Country Artists of All-Time, induction to the Nashville Songwriters Hall of Fame, and the Heritage Award as the most-performed country songwriter-artist of ASCAP’s first 100 years. The man from rural Newnan, GA has sold nearly 60-million albums worldwide, ranks as one of the 10 best-selling male vocalists of all-time in all genres. He has released more than 60 singles – registering 50 Top Ten hits and 35 #1s (including 26 Billboard chart-toppers). He has earned more than 150 music industry awards – including 18 Academy of Country Music Awards, 16 Country Music Association Awards, a pair of Grammys and ASCAP’s Founders and Golden Note Awards. Jackson is one of the most successful and respected singer-songwriters in music. He is in the elite company of Paul McCartney and John Lennon among songwriters who’ve written more than 20 songs that they’ve recorded and taken to the top of the charts. Jackson is one of the best-selling artists since the inception of SoundScan, ranking alongside the likes of Eminem and Metallica.

Recently named the #1 honky-tonk in Nashville by Billboard and located at 421 Broadway in the heart of downtown Nashville, AJ’s Good Time Bar is named for Jackson’s 2008 chart-topper “Good Time.” Each floor sports a different personality, showcasing Jackson’s varied interests and hobbies. On the first floor, “AJ’s Honky Tonk” prominently features live country music, while the second-floor “GT Bar” offers a sports- and car-themed atmosphere. The “Hullbilly Bar” on the third floor is proving to be one of the venue’s biggest draws — it’s modeled after Jackson’s Merritt Sportfish boat seen in his music videos for “It’s Five O’Clock Somewhere” and “Long Way to Go.” That level also features karaoke and live music. The rooftop “Star Bar” caps AJ’s Good Time Bar, providing a panoramic view encompassing the historic Ryman Auditorium, Broadway, Nissan Stadium and all of downtown Music City from its vantage point four stories above the stretch of road commonly called the “Honky Tonk Highway,” just like Jackson’s current tour. As sole owner and visionary behind the venue, Jackson is known to make appearances at AJ’s during the week and when not on the road. He’s also a majority owner in ACME Feed & Seed, located just blocks away at 1st Avenue and Broadway.