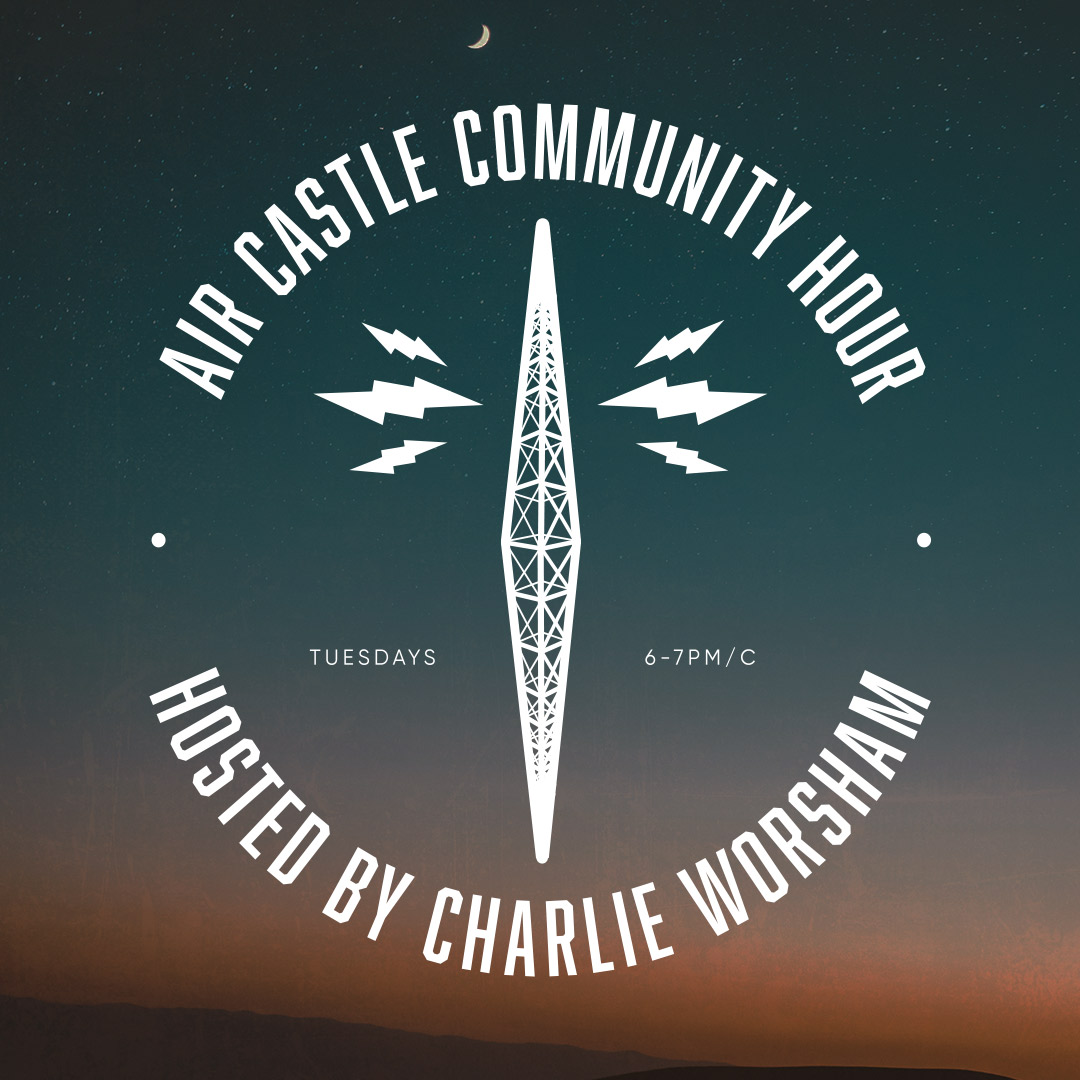 The first episode airs July 7 at 6pm/c, and new episodes will air the first Tuesday of each month at 6pm/c.

We hope you’ll join us by tuning in on 650 AM, WSMonline.com, or the WSM app!

Get to know our host, Charlie Worsham 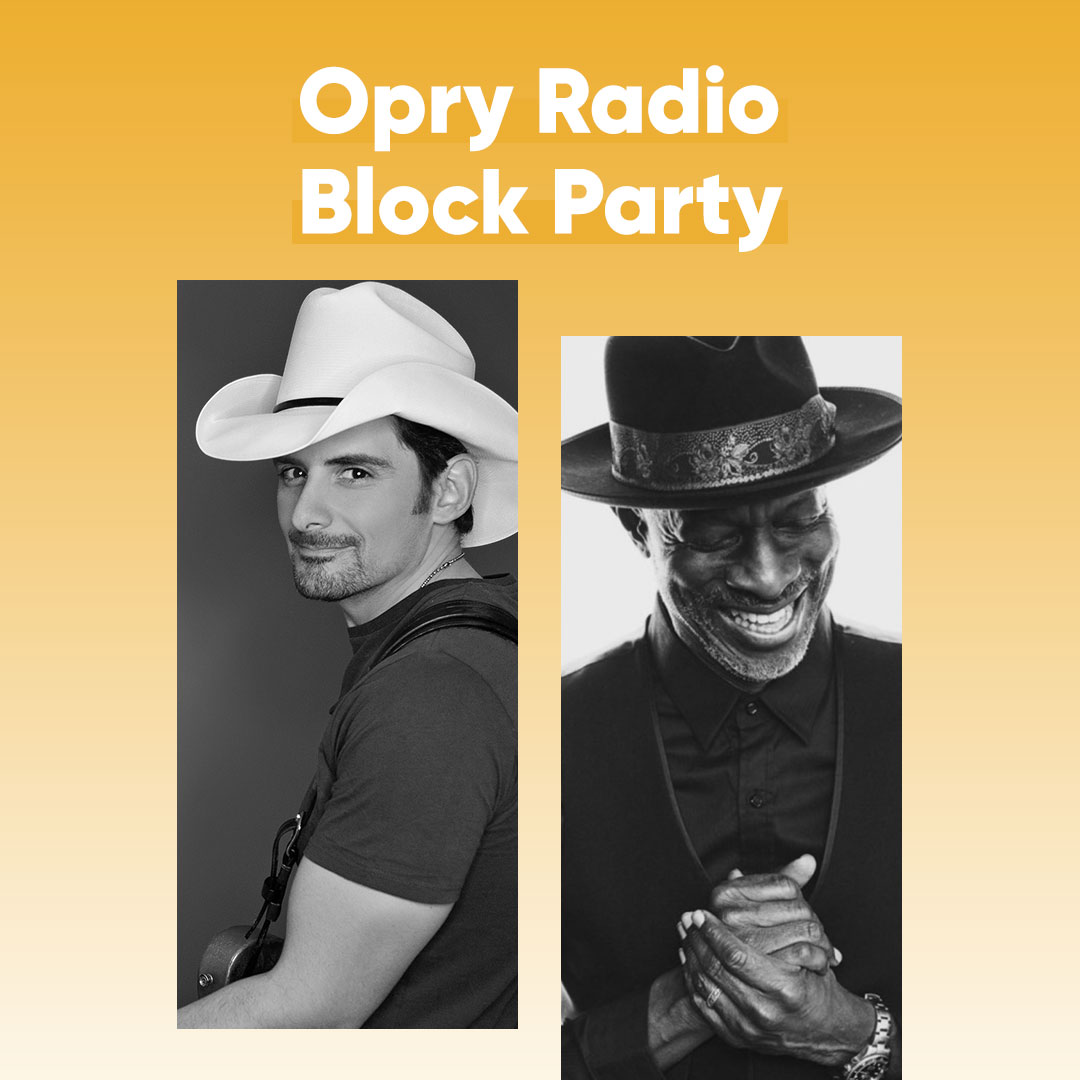 Join us this Saturday, June 27 at 6pm/c on WSM Radio for another Opry Radio Block Party! We’ll be spinning our favorite songs from Brad Paisley and Keb’ Mo’ before they step inside the historic Opry circle at 7pm/c. Like always stick around with us after the Opry to keep the party going until 9pm/c!

What’s your favorite song from Brad Paisley and Keb’ Mo’?

Request it below and you just might hear it during the Opry Radio Block Party on Saturday, June 27! 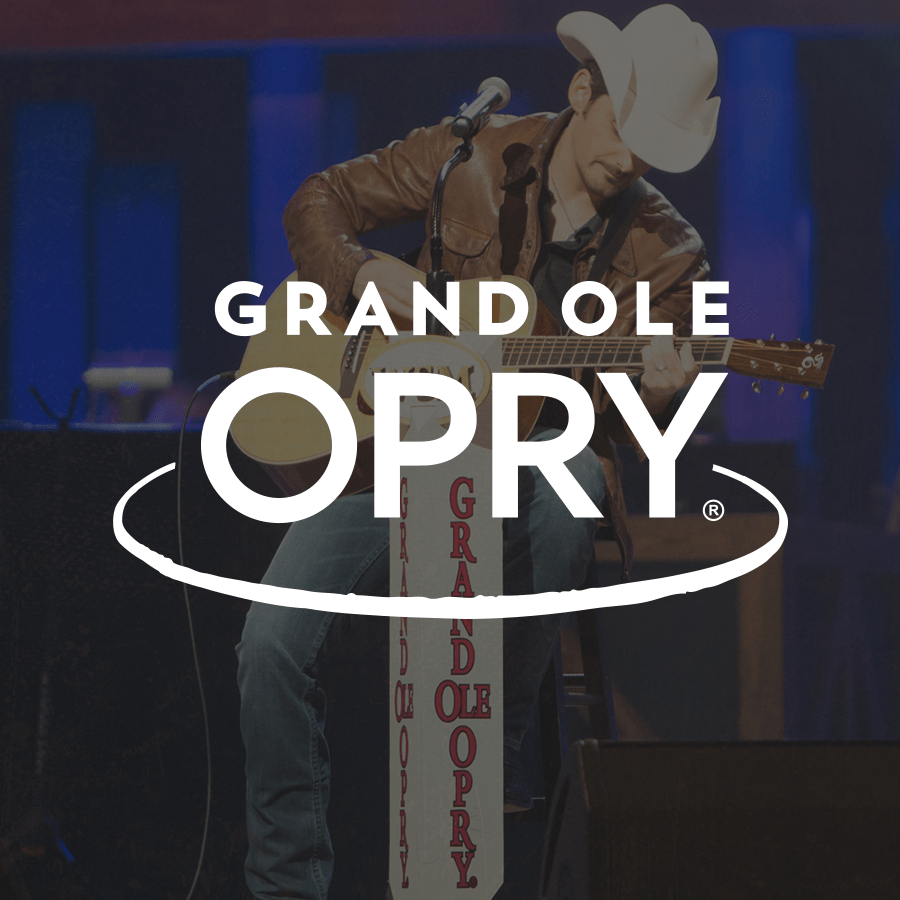 NASHVILLE, Tenn. – (June 25, 2020) The Grand Ole Opry® presented by Humana® will celebrate Independence Day as Sara Evans and Opry members the Oak Ridge Boys and Mark Wills step into the circle for the 4,931st consecutive Saturday night broadcast on July 4.

Circle will be celebrating an July 4th America’s Birthday Bash all weekend including Saturday’s Opry Live, as well as Circle Sessions with Craig Morgan at 7:30 PM ET/ 6:30 PM CT immediately prior to the live Opry and Authentic America hosted by Nan and Charlie Kelley at 9 PM ET/8 PM CT after the Opry. Opry Live on Circle will be hosted by Bobby Bones, and the livestream will be guest hosted by Natalie Stovall, a member of the country trio Runaway June and a host of Circle’s Southern Weekend. Opry announcer Mike Terry will be heard on 650 AM WSM and SiriusXM. America’s Birthday Bash Fourth of July Circle programming is in association with Wounded Warriors.

Shriners Hospitals for Children, Bass Pro Shops and Cabela’s will be part of the July 4th broadcast of Opry Live on Circle.

This Saturday, June 27, Opry member Brad Paisley and music great Keb’ Mo’ will step onto the Grand Ole Opry stage at 8 PM ET / 7 PM CT.  The show will be broadcast live on Circle, and Gray TV stations, DISH Studio Channel 102, Sling TV and other TV affiliates in addition to a companion live stream on Circle All Access Facebook and YouTube channels.

Those tuning into the Livestream on the Circle All Access YouTube and Facebook channels this Saturday can watch a Circle Sessions with country artist Tenille Townes hosted by Nan Kelley at 7:30 PM ET/ 6:30 PM CT immediately prior to the Opry. After the Opry livestream, an episode of The Best of Coffee, Country & Cody will air. The episode features Rhett Akins and Marty Stuart. who join Bill Cody, Jo Smith and Charlie Mattos.

During the current global pandemic, the Opry has overcome ongoing challenges and obstacles as health guidelines and local/state government restrictions have evolved weekly. The Opry, with the help of its membership and wider artist and industry community, has continued to bring millions of fans around the world together to keep the music playing without an Opry House audience in attendance.  Embracing today’s technology, the Opry is broadcast on Circle Television and radio and streamed with a very small production team as the show’s artists perform acoustically.

About the Grand Ole Opry

To plan an Opry visit, call (800) SEE-OPRY or visit opry.com. The Opry presents the best in country music live every week from Nashville, Tenn.  The Opry can be heard at opry.com and wsmradio.com, Opry and WSM mobile apps, SiriusXM, and its flagship home, 650 AM-WSM. The Grand Ole Opry is owned by Ryman Hospitality Properties (NYSE: RHP).  For more information, visit opry.com..

For more details and to find out if Circle is available in your market, please visit www.CirclePlus.com  For more information about Circle, please contact: info@circleplus.com

For the Circle and the Grand Ole Opry:
Schmidt Relations
Jessie Schmidt  Jessie@schmidtpr.com 615-491-7988 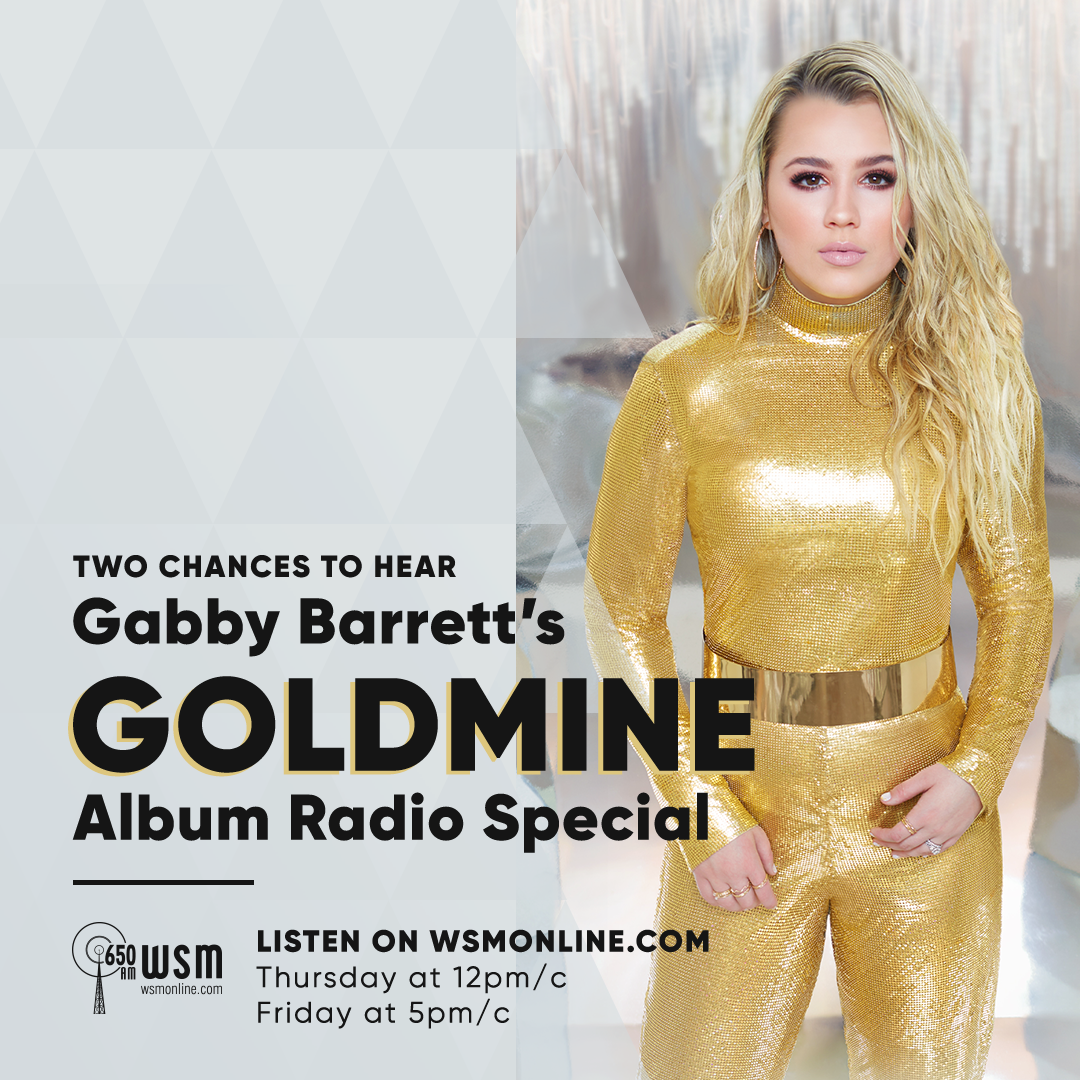 We’re bringing you Gabby Barrett’s Goldmine Album Radio Special on WSM Radio! Tune in this Thursday, June 25 at 12pm/c or Friday, June 26 at 5pm/c to hear the new music track-by-track with Gabby Barrett. Listen on 650 AM, WSMonline.com, or the WSM app.

CHECK OUT THE ALBUM HERE 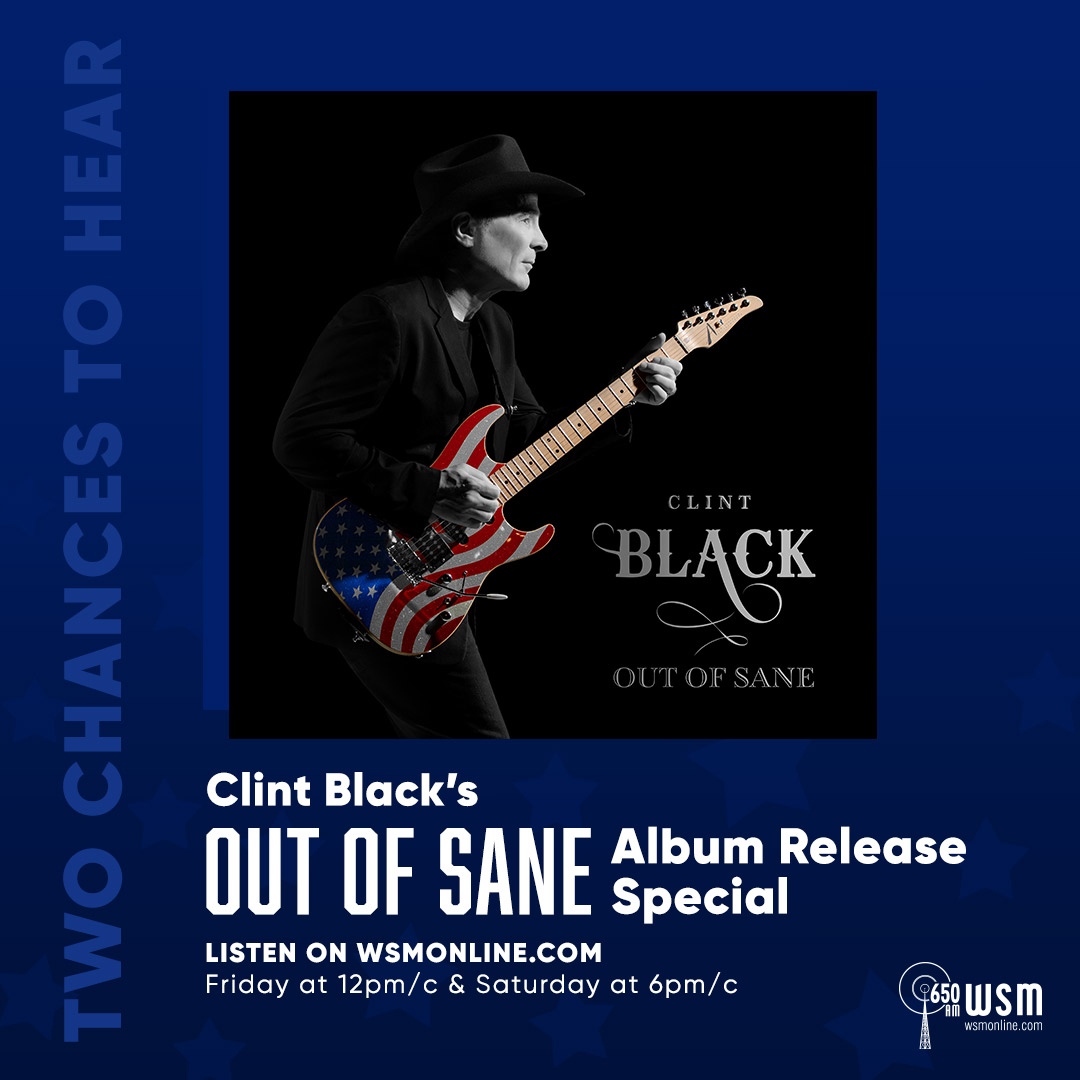 We’re bringing you Clint Black’s Out Of Sane Album Release Special on WSM Radio! Tune in this Friday, June 19 at 12pm/c or Saturday, June 20 at 6pm/c before the Opry to hear the new music track-by-track with Clint Black. Listen on 650 AM, WSMonline.com, or the WSM app.

CHECK OUT THE ALBUM HERE

Watch the “America (Still In Love With You)” music video now! 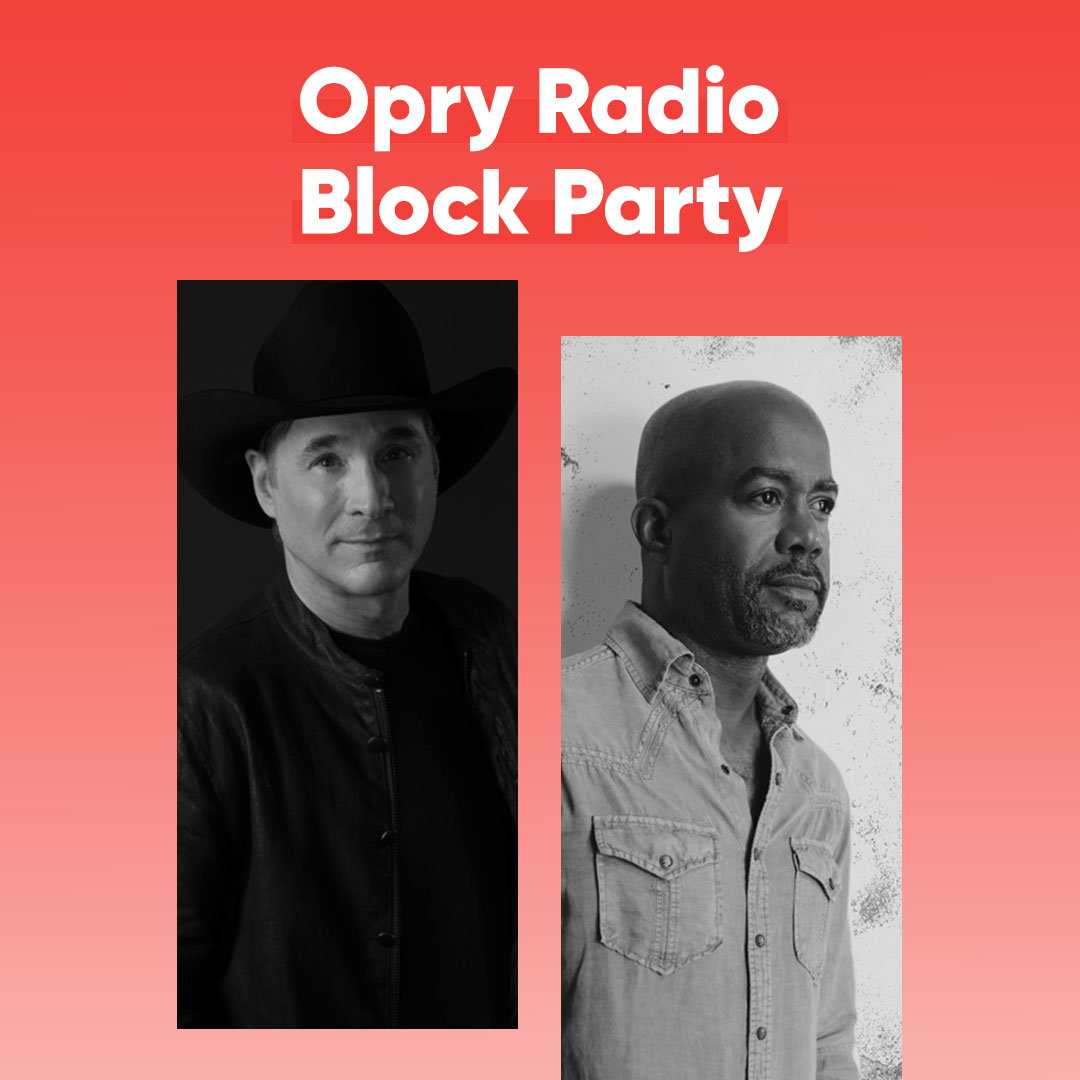 Join us this Saturday, June 20 at 6pm/c on WSM Radio for another Opry Radio Block Party! We’ll be spinning our favorite songs from Clint Black and Darius Rucker before they step inside the historic Opry circle at 7pm/c. Like always stick around with us after the Opry to keep the party going until 9pm/c!

What’s your favorite song from Clint Black or Darius Rucker?

Request it below and you just might hear it during the Opry Radio Block Party on Saturday, June 20! 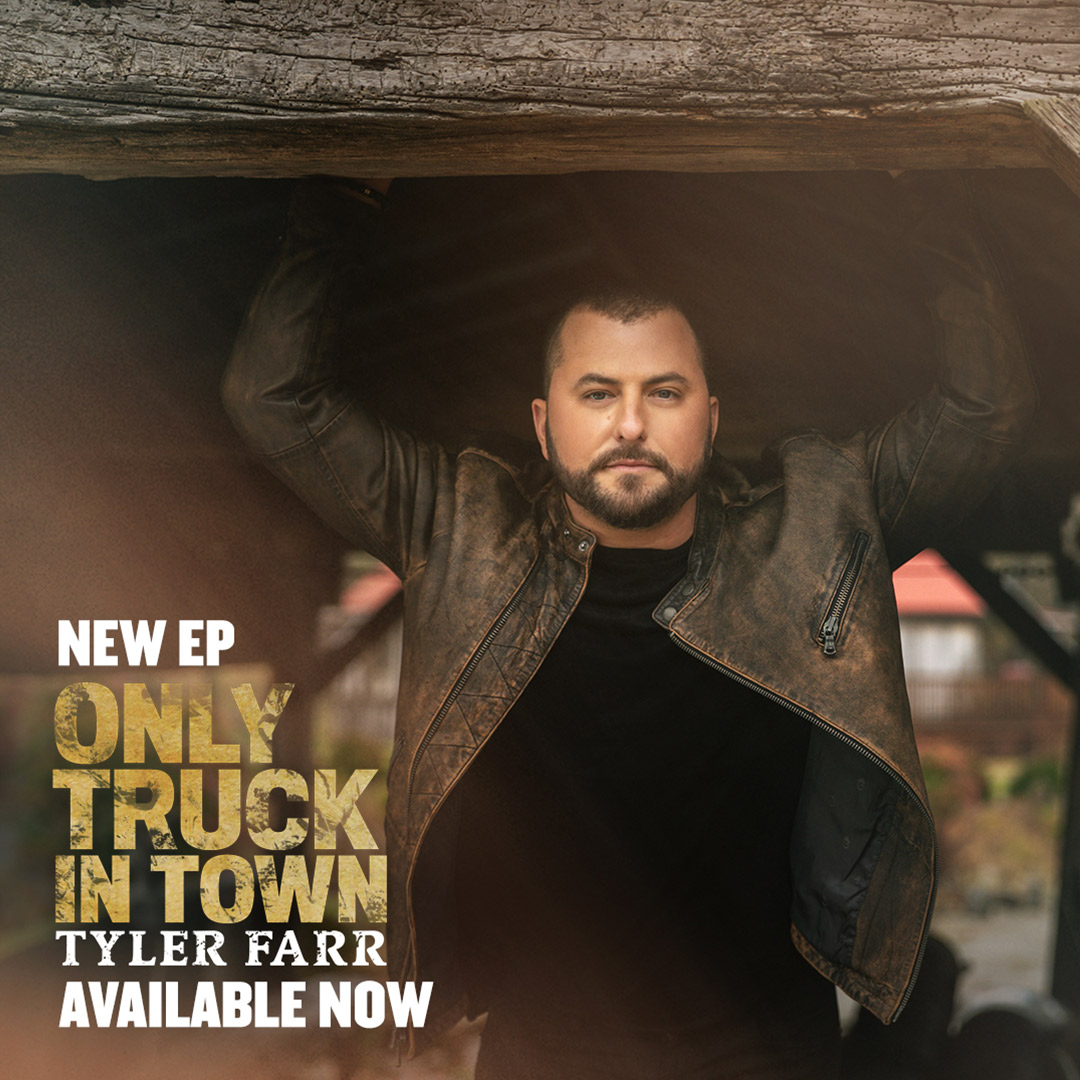 We’re bringing you Tyler Farr’s Only Truck In Town Release Special on WSM Radio! Tune in this Friday, June 12 at 12pm/c or Saturday, June 13 at 6pm/c before the Opry to hear the new music track-by-track with Tyler Farr. Listen on 650 AM, WSMonline.com, or the WSM app.

LISTEN TO THE EP HERE

Watch the “Only Truck In Town” music video now! 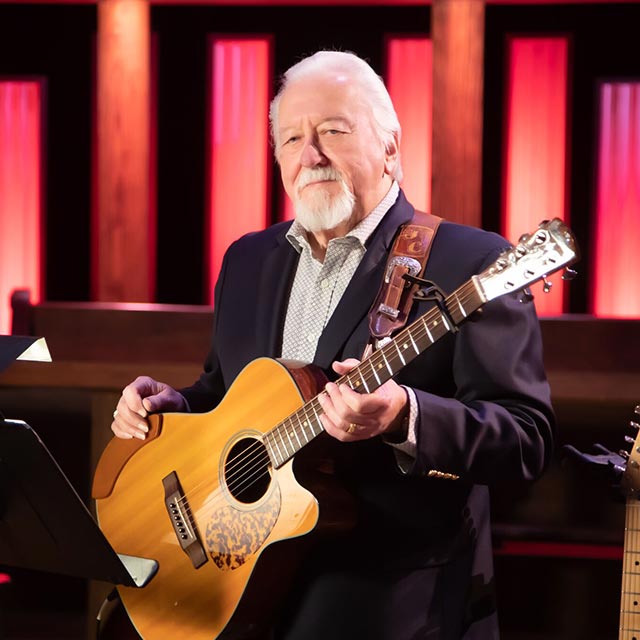 Join us for a special broadcast on June 9 at 1pm/c as we remember our friend, Jimmy Capps

UPDATE: For anyone who was unable to tune in to the service live, the audio recording is available now in the WSM archive via our Tribute Shows page or via the WSM Soundcloud.

Tune in this Tuesday at 1pm/c to WSMonline.com as we live broadcast his memorial service from the Grand Ole Opry House. The service can be heard worldwide on our Opry Nashville digital stream.

All of us at WSM want to send our heartfelt condolences to the friends and family of Grand Ole Opry House Band Guitarist, Jimmy Capps. Nights at the Opry won’t be the same without Jimmy Capps, without his guitar, his ties to those who came before, his smile, and his spirit. Thank you for more than 60 years of incredible music, Jimmy. We sure will miss you.

CLICK TO LISTEN TO THE ARCHIVE OF THE SERVICE

Beloved veteran musician Jimmy Capps, who played on hit songs such as Kenny Rogers’ “The Gambler,” George Jones’ “He Stopped Loving Her Today,” and George Strait’s “Amarillo by Morning”, passed away on Monday, June 1, 2020 at 81 years of age. Jimmy was born on May 25, 1939 in Fayetteville, North Carolina to the late Tommie and Alice (Stevens) Capps.

He was a guitarist on the Grand Ole Opry for over sixty-one years – longer than any musician. In 2014, he was inducted into the Musicians Hall of Fame with fellow inductees, Peter Frampton, Will Lee, and Barbara Mandrell, etc. ; in that same year, he was inducted into the North Carolina Music Hall of Fame. In 2015, the Tennessee Senate passed a Joint Resolution recognizing his musical contributions, and it was presented to him on the Senate floor. For his decorated career, in 2012 he was inducted into the Country Music Hall of Fame’s “Nashville Cats”. In 2018, to mark his sixtieth year at the Grand Ole Opry, the band room was named the “Jimmy Capps Music Room.” Beginning in 2009, he also regularly appeared as “Sheriff” Jimmy Capps on Larry’s Country Diner on RFD-TV. In addition to that show, he also played on many other TV shows throughout his career, like The Statler Brothers Shows, The Wilburn Brothers, CMA shows, etc. Jimmy is also on “Country’s Family Reunion” on RFD-TV.

He began playing the guitar when he was 12. At age 19, he auditioned for the Louvin Brothers and was asked to join the sibling duo by Charlie Louvin. “Thanks to Charlie – I guess I owe my whole career to him.” Jimmy made his first appearance on the Grand Ole Opry with the Louvins in 1959. He was also in the Opry staff band, playing lead guitar behind the radio show’s guests every week up until his passing.

Along with his onstage work, Capps was an in-demand session musician, known for his smooth playing style of both acoustic and electric guitar, on recordings like Tammy Wynette’s “Stand by Your Man,” Barbara Mandrell’s “I Was Country When Country Wasn’t Cool,” Alan Jackson’s “Here in the Real World”, the Oak Ridge Boys “Elvira”, Ronnie Milsap’s “Smoky Mountain Rain”, Reba McEntire’s “How Blue”, and many others.

Mr. Capps served his country in the United States Army. Jimmy and Michele attended the First Apostolic Church of Nashville.

In addition to his parents, he is preceded in death by two brothers.
He is survived by his wife, Michele Voan Capps; two sons, Mark, and his wife, Tara Solomon-Capps, and Jeff Capps; two grandchildren, Summer Capps and Mollie McKenzie Acuff. Mr. Capps is also survived by a host of relatives and friends.

Public visitation for Jimmy Capps will be Monday June 8th, 3pm-8pm at the First Apostolic Church, 265 Broadmoor Dr, Nashville, TN 37207.
**Due to concerns for everyone’s health and safety, we must ask that attendance at a private service for Jimmy at the Grand Ole Opry House Tuesday – “Call Time” – 1pm be limited. While friends and family members attending the service will be sent instructions concerning arrival at the Opry House and social distancing details, we invite Jimmy’s countless other friends, colleagues, and fans to listen to the service on wsmradio.com. We thank everyone for your understanding as current conditions make a terribly sad time for us even more difficult. Entombment will follow the service in the Historic Spring Hill Cemetery.

The family will be accepting floral arrangements for Mr. Capps. If you wish to contribute in his honor, you may do so to the AFM 257 Vic Willis Emergency Relief Fund (11 Music Circle North – Nashville, TN 37203).
Spring Hill Funeral Home & Cemetery (5110 Gallatin Road Nashville, Tennessee 37216; 615-865-1101) has been entrusted with the final care of Mr. Capps. www.springhillfh.com

*The autobiography of Jimmy Capps is available for purchase at www.jimmycapps.com

*We will be observing all social distancing guidelines set forth by our local government. Friends and visitors will need to social distance as required so that we may be able to accommodate everyone that comes to pay their respects to Mr. Capps. 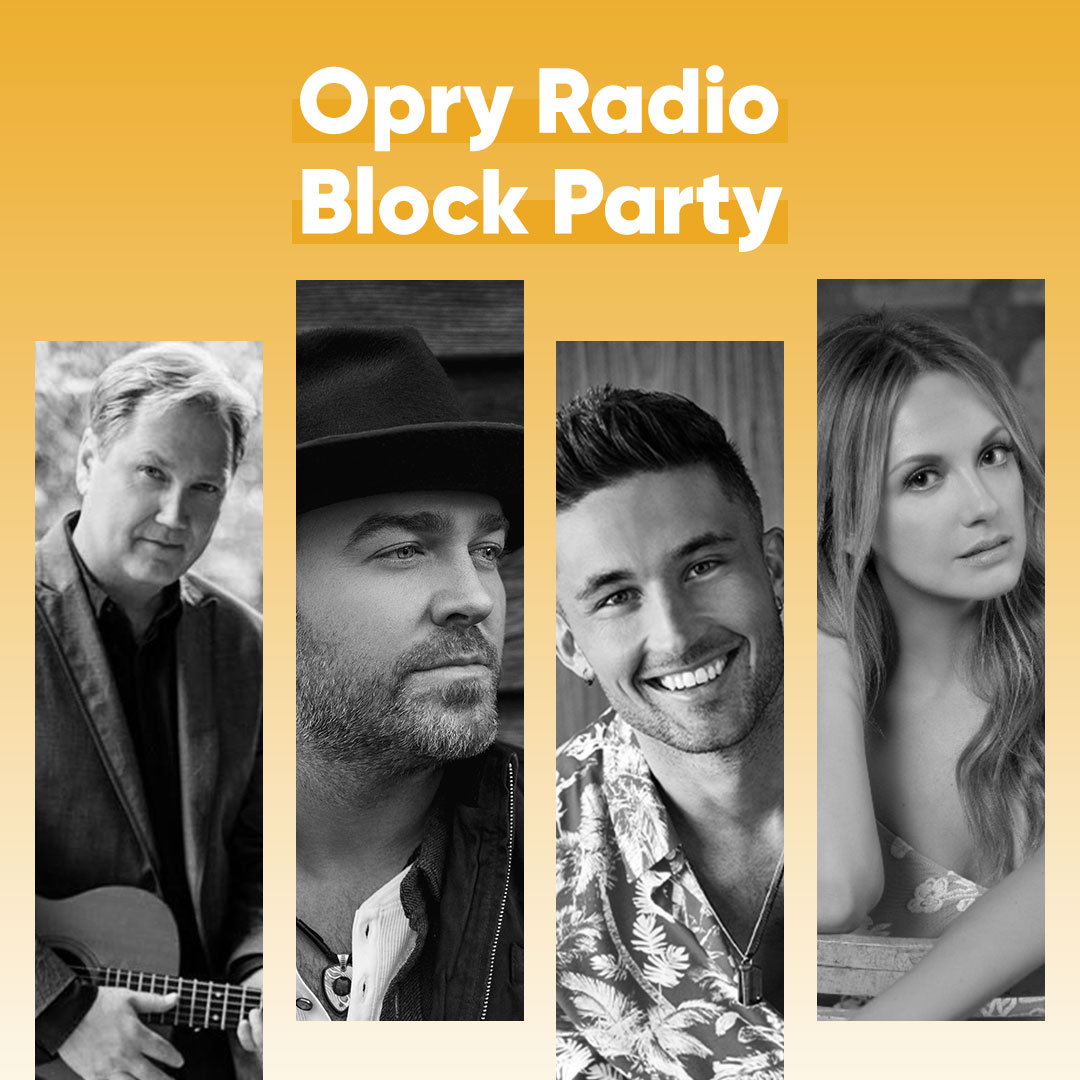 Join us this Saturday, June 6 at 6pm/c on WSM Radio for another Opry Radio Block Party! We’ll be playing all our favorite songs from Steve Wariner, Lee Brice, Michael Ray, and Carly Pearce before they step inside that historic Opry circle at 7pm/c. Like always stick around with us after the Opry to keep the party going until 9pm/c!

Let us know your favorite song below and you just might hear it during the Opry Radio Block Party on Saturday, June 6! 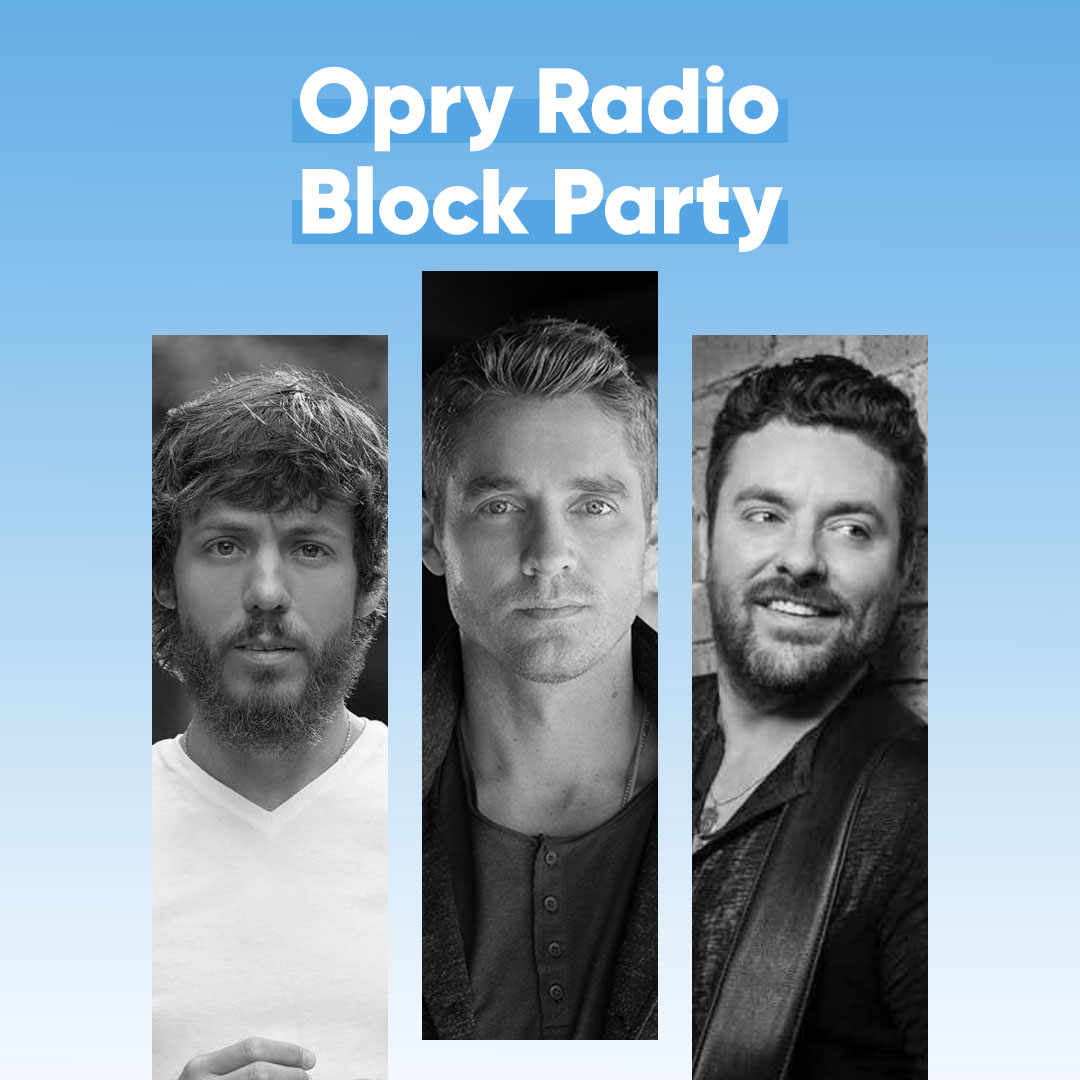 Join us this Saturday, May 30 at 6pm/c on WSM Radio for another Opry Radio Block Party! We’ll be cranking up our favorite songs from Chris Janson, Brett Young, & Chris Young before they step inside that historic Opry circle at 7pm/c. Like always stick around with us after the Opry to keep the party going until 9pm/c!

Request it below and you just might hear it during the Opry Radio Block Party on Saturday, May 30!