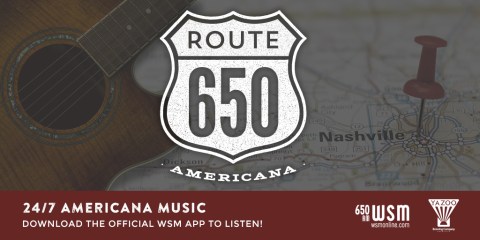 NASHVILLE, TN – 650 AM WSM, the radio home of the Grand Ole Opry, has launched ROUTE 650, a new 24/7 Americana music streaming station available online at wsmradio.com and via the station’s mobile app.

ROUTE 650 will feature music from current Americana artists such as Jason Isbell, Margo Price, and Amanda Shires, plus explore cuts from the founders of Americana including Kris Kristofferson and John Prine. The stream is also the new home for Whiskey Wednesday, a popular Americana-based weekly show hosted by Wild Ponies, an eclectic Americana duo fronted by husband and wife team Doug and Telisha Williams.

“Americana is beyond just a music genre, it’s a community of artists that have come together to create an outlet for great music to be heard,” said Eric Marcum, ROUTE 650 show host. “WSM is honored to have created and launched ROUTE 650 – our 24/7 Americana music streaming station.”

WSM’s terrestrial ROUTE 650 Americana-focused show hosted by Marcum and airing weeknights from 6-7 p.m. CT on 650 AM and wsmradio.com, launched in April 2016. Since its inception, the show has held strong market ratings and featured interviews and performances from the likes of John Paul White, Todd Snider, Nitty Gritty Dirt Band, Holly Williams, Old Crow Medicine Show, Jim Lauderdale, and more. Most recently, the show celebrated a full on-air take over with the artists of John Prine’s Oh Boy Records programming the entire hour.

“In the process of planning this new digital station, it became clear that what our terrestrial ROUTE 650 show has become is largely the embodiment of what we envision the 24/7 stream to be, while also giving a tip of the hat to its genesis in WSM-AM,” remarked Chris Kulick, WSM General Manager.

As part of the station’s launch week programming, listeners can tune in for special behind-the-scenes interviews, content, and performances from the 18th Annual Americana Music Festival and Conference, a must-attend event for anyone who loves the melting pot of Americana’s influences including roots, folk, country, blues and soul-based music.